The Pucará of Tilcara is one of the most important pre-Hispanic settlements of the Quebrada de Humahuaca . Located strategically in the area where the main creek and the Huasamayo and Huichaira creeks meet, this site allows the four accesses to the Puna region and the Valles region to be dominated. Today it is one of the most visited tourist attractions in the province of Jujuy. These pre-Inca ruins are located in the village of Tilcara , just 1.5 km from its main square.

The term "Pucará" means "Strength" in the Quechua language. This Pucará is one of the many that exist in the Quebrada de Humahuaca, and throughout the central Andean region to Ecuador. It has the peculiarity that it was rebuilt by archaeologists of the University of Buenos Aires between 1911 and 1948. The work Juan Bautista Ambrosetti began and Eduardo Casanova finished it. 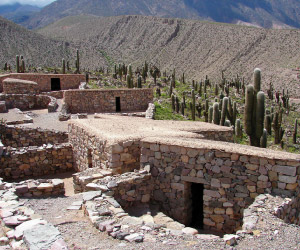 Do you feel like sinking your thoughts in an almost forgotten moment in Argentine history? Few history books tell us the true history of our country and we hardly have time to study it or at least they tell us. Tourism within Argentina is a good alternative to counteract this lack. The houses, temples, sacred places and daily work can help to reconstruct this long history of some villages that disappeared fighting to preserve their own.

Formerly this fortress was used as a strategic point for the defense and protection of the crops and riches of the "tilcaras", a local tribe that was part of the omaguacas ethnic group. Until recently it was thought that the guarded wealth was within what would now be the territory of the city of Tilcara but in fact it was on the slopes of the Huasamayo River, on the way to the Yungas, to the east of the province of Jujuy, where you can see hundreds of Andean cultivation terraces. These constitute and constituted the main treasure of these Andean towns, the main wealth being quinoa.

Even so and given the remoteness with the main cultivation area, the Pucará de Tilcara functioned as a small village, with pens, houses, own cultivation terraces and religious centers. In the southern part of Pucará are the pens where the llamas were once kept, an important part of the economy of the locals of yesteryear. 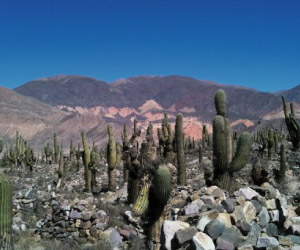 Some specialists believe that this archeological attraction has been incorrectly rebuilt. Beyond this opinion, the interesting thing is that to carry out the work a joint work was carried out between the community and the archaeologists of the University of Buenos Aires. Throughout this work we tried to think and rebuild the different houses and religious centers based on the worldview of the time, resulting in what we find there today. Whether or not they have lived that way, tilcaras at least we have an idea of ??how they were able to live.

The Pucará de Tilcara is a very popular tour due to its proximity to the city of Tilcara (access is easy) and its concentration of culture. This attraction is visited by almost one million people per year. With the same entrance ticket to Pucará one can access the Archaeological Museum of Tilcara in which the history and culture of the "tilcaras", their customs and rites are exposed through the exhibition of their weapons, vessels , clothes, etc.

As of the year of the Argentine bicentennial (2010), Pucará de Tilcara is a national symbol, stamped on the new currency of an Argentine peso.


What days can you visit the Pucará de Tilcara?


DURATION OF THE VISIT: 1 hour and 20 minutes


How to make an appointment for the Pucará de Tilcara?

To book a place you have to send an email to reservaspucaradetilcara@gmail.com or directly call to this phone number: 0388-4955073 / 006.

You can take special shifts for groups on Thursday to Sunday from 9 a.m. to 1 p.m.


How much is the entrance fee for the Pucará de Tilcara?

On Mondays usually it is free.