A mural, mirror of my people

Noisy, picturesque and magical, the Municipal Market of Tilcara, opens its doors to tilcareñ1os and strangers. Placed between the boxes of vegetables and fruits, delicious, fresh and healthy, the Cholas are camouflaged preparing the Api and the Buñuelos for the Quebradeño breakfast. 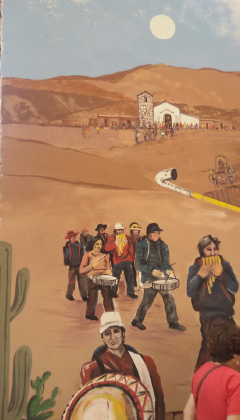 Voices mingle as in the Tower of Babel. The tunes of the hill, the Buenos Aires ceases and a hundred voices, travelers from all over the world, who in different languages ??express their astonishment. The market awaits us with that magic: its own aroma, which tells us of bronze-colored hands, sun-tanned skins, sown crops and crops on the banks of the "Río Grande".

The colorful flowers, the stalls with their pots of Locro, Picante de Lengua, Chuño and mote. The "empanaderas" and "humiteras" (the ones that prepare and sell "empanadas" and "humitas"), and beyond the fair of clothes and others. It is a painting, a painting ... Like the mural that adorns the Market in the background.

That mural, that summary of customs and uses of Brittany, which in its lines tells us stories. Stories of more than ten thousand years of human presence in these payments. Ancient culture, religious syncretism, future ... A hill, perhaps the Black Hill, Tilcareño watch.

At their feet, the houses molded with the clay and stones of the Huasamayo. Clay and kneaded mud, which from the Garganta del Diablo slides to the skirt of the town. The pircas, millenary or modern, but of unmistakable Andean style, that since the archaic time of the "Fiscaras" (the original name of the habitants of this region), are the foundations of the houses or the fences of corrals, as we see it in the Pucaráa Ruins or road to the Alfarcito. 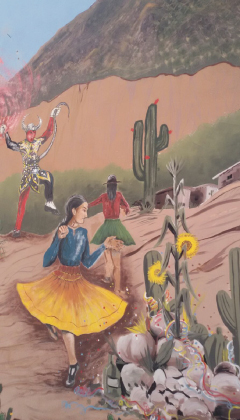 Two women, anticipating August, corpachating Mother Earth, holy and good Pachamama. A Sikuri, that to the rumor of its reeds or to the breath of its lips, harmonizes solitudes or the joys of an encounter ... Deep and hoarse, the sound of the Erke that the Runa raises on its shoulders announcing the descent of the pilgrims, that from the height of the Abra, the one they call from Punta Corral, on their shoulders they carry the Virgin of Copacabana, renamed Virgin of the Abra, to the Church of the Rosary, every Holy Week ... A Mojón and a carnival devil, with its thousands of mirrors that give us back our own face, which releases us in February, which brings us the carnival.

"...Inti, Tata Sol, Quilla, Mama Luna, two Condores in flight and that Tilcareño sky that makes you want to fly..."

Does that mural say it all? Does it tell everything? ... I don't know ... But, because it will be that when I see it, I am born from the chest a rumor to Sikus, to old voices, to pebbles detached from those peaks that grip the look of the one who knew you Tilcara ... and can not forget you...?

Ricardo Vilca, his music and his people